BIRTH OF THE .44 MAGNUM – HISTORY REPEATS ITSELF

You may recall, in a previous article, that you were introduced to Elmen Keith, premier hunter and writer of all things firearms related. It was he who was credited with being the inspiration behind Smith & Wesson’s(S&W) .357 magnum, which was introduced in 1935. Let us now move ahead a couple of decades.
In the early fifties there was some interest in long-range, hand shooting. Here we are talking about some distances beyond 300 yards! Obviously, a handgun of some ballistic puissance was required to accomplish the task.

An S&W in the .44 special caliber was available then; and the hand loaders began experimenting. The .44 special revolver that S&W offered was on the big “N” frame. That was definitely fortuitous. Anything smaller would have been dangerous when firing hot-loaded .44 special rounds.

As he did twenty years before with the .357 magnum, Keith approached S&W to develop a move-potent round based on the .44 special bullet. His selling point were twofold. A revolver with an eight- and 3/8 inch barrel was perfect for long-range shooting at paper targets. One with a four or six inch barrel was a capable backup choice when hunting dangerous game. Well, Keith’s argument were apparently persuasive; and S&W in 1955 debuted its new revolver. The cartridge it fired was the .44 Remington Magnum, which appeared on the market concurrently. The firearm was given the designation “Model 29” in 1958 when S&W initiated the practice of numbering their respective models. The .44 magnum was a beautiful gun. It had an adjustable rear sight and Goncalo alves grips with a deep blue or nickel finish. Did S&W produce a marketing coup? 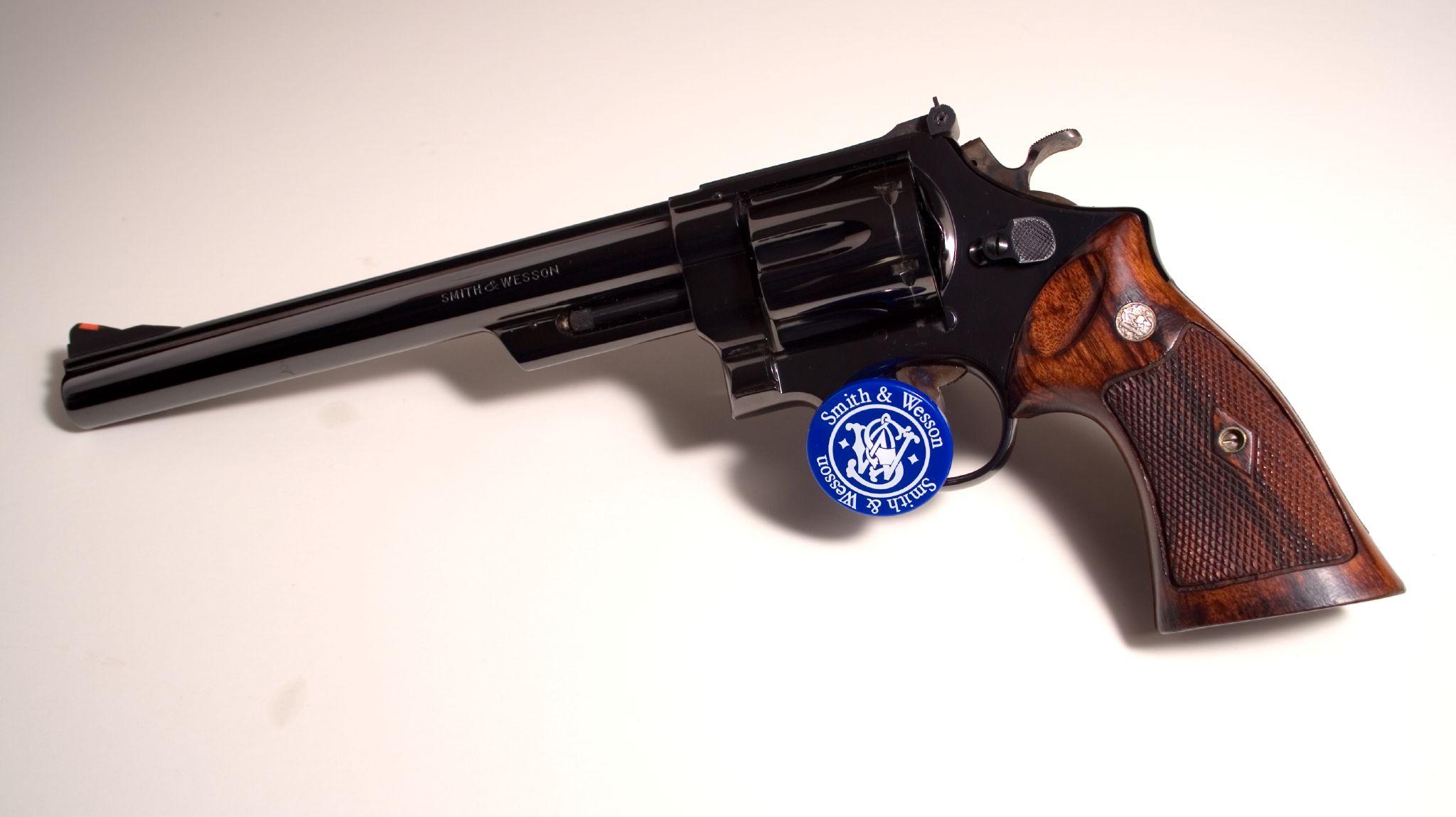 When the gun was first introduced there were some initial interest; but then the enthusiasm for the .44 magnum wanted. Its seems that veteran shooters did not know what to do with it. Handgun shooters was supposed to be an enjoyable pastime. If one were of a certain age and say had a touch of arthritis in the phalanges, then shooting the .44 magnum might prove problematic. Some might ever refer to the experience as “bone rattling”. It finally became a niche gun with limited general appeal.

Let us now move ahead to 1971. Who can ever forget those lines from the seminal cop movie of that year? “This is a .44 magnum, the most powerful hand gun in the world. It can take your head clean off. Well punk, do you feel lucky?” Inspector Harry Callahan had unconsciously initiated a phenomenon.
With the popularity of Dirty Harry, interest in the Model 29 skyrocketed. This came almost from younger shooters.(It might be unkind to suggest that there was something freudian occurring here.)

When a gun dealer was able to obtain one, the perspective customer could not rely on paying the manufacturer’s suggested retail price. This was definitely a seller’s market.

My first .44 magnum was a Ruger Super Blackhawk. It was a fine, single-action revolver. I later was able to find an S&W model 29 with an eight and 3/8-inch barrel. I was really proud as punch of my latest acquisition. On reflection, it was of limited utility. It was too big to carry as a defense weapon, either on one’s person or in a vehicle. I was not in a position to do any hunting or long-range shooting at paper targets at the time. Still and all, I revealed in the reactions of the fellow shooters at the range whenever I brought out the hand cannon.
Let us return to Dirty Harry’s memorable words “This is a .44 magnum, the most powerful handgun in the world.” He was certainly correct in 1971; but then the gantlet was thrown. The ballistics race had begun. We will discuss attempts to produce a more powerful cartridge in a future article, inattentively entitled “Magnum Madness”.