In the early 1950’s, the State of Texas wisely decided to arm their Highway Patrol Officers with a more-powerful handgun. Unlike the junk seen on the roads today, those Packards and Hudsons were built like a M-48 Patton Tank. A bullet with penetration power was definitely desired.

In those days, unlike modern times, there were limited cartridge options to choose from. The .41 Magnum and .44 Magnum were not yet invented. The only .357 Magnum that I can recall, at that time, was made by Smith & Wesson. In fact, S&W introduced the .357 Magnum in 1935, but that is another story for a different day. The beloved Colt Python did not appear on the market until much later in 1955 and S&W only offered the .357 Magnum in the big N Frame. In 1958, S&W began numbering their models and the N Frame .357 Magnum became the Model 27. 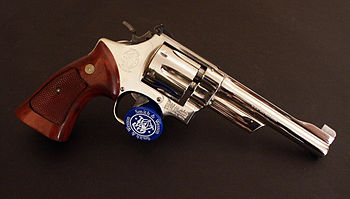 This gun was truly a work of art with deep blue or nickel finish and beautiful checkered grips. Anyway, the State of Texas wanted wanted the gun but did not want to pay for the fancy finish. S&W agreed to furnish Texas with the .357 Magnum in a more “plain-jane” finish. Thus, the Highway Patrolman was born.

S&W felt that they had a winner, so the Highway Patrolman was offered to commercial market. Like other classic wheel guns, those Highway Patrolmans ( Model 28 ) that appear on the market today demand a premium. It is still an affordable option when compared to a vintage Colt and a pleasure to own and shoot.